BETHLEHEM, Pa. (May 5, 2014) – AltusGroup has donated $5,000 to the Prestressed/Precast Concrete Institute Foundation in the name of Mario J. Bertolini who passed away in February 2014 at the age of 79. 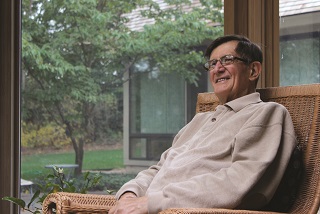 Bertolini was president and CEO of Branford, Conn.-based Blakeslee Prestress Inc., a longtime member of AltusGroup, which is an international partnership of precast concrete manufacturers dedicated to innovation. He was a PCI Fellow, past PCI chairman, and 2011 PCI Medal of Honor recipient in addition to sitting on more than three dozen committees during his illustrious career in the precast industry.

The gift was presented to Bertolini’s son, Peter, at the AltusGroup Annual General Meeting, April 23, 2014, in Chicago, IL.  Peter later handed the check to Jim Voss, treasurer of the PCI Foundation, who graciously accepted the gift.

“Mario was such an influential force in our industry,” said John Carson, Executive Director of AltusGroup. “He was a man of great passion and honor, so it was only appropriate that we marked his passing with appreciation for his integrity and humility.”

The first-ever international partnership of precast companies, AltusGroup was founded in 2003 to develop, manufacture and market precast innovations such as the award-winning CarbonCast® line of products featuring C-GRID carbon fiber grid reinforcing. With more than two dozen structural and architectural locations in the United States, the 16 North American and three international AltusGroup companies have an unparalleled network of manufacturing plants, technical staff and sales personnel to ensure architects, engineers and contractors get the help they need—and the quality and performance they expect—when they select CarbonCast products. For more information, visit altusprecast.com or call 866-GO-ALTUS.

Search by product or location for a provider near your project

Find a precaster and request a quote

CarbonCast products are available exclusively from 17 AltusGroup precasters across North America. Search by product and location to find a nearby production facility.